Story by Jenny Charlesworth at spinner.com about Willie Nelson being arrested for Weed here in Texas again. Keep fighting for your rights, Willie!!

“Willie Nelson found himself behind bars yet again today after being arrested for possession of pot in Sierra, Texas. It appears that laidback country crooner’s 2006 misdemeanor for having weed and magic mushrooms on his tour bus wasn’t enough to keep the legendary singer-songwriter on the straight and narrow, as Border Patrol allegedly seized six ounces of marijuana from Nelson as he and his entourage passed through a checkpoint at 9AM on Nov. 26. 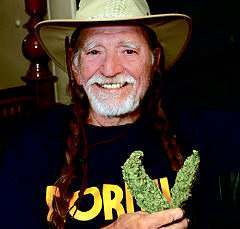 The 77-year-old rocker was arrested and booked into the Hudspeth County Jail on a $2,500 bond, but has has since posted bail and rejoined his family and crew in Austin, Texas.

Many have joked about legalizing Nelson’s tour bus to make it a puff-friendly zone, and after this latest brush with the law, it appears that might be the only way to keep old Nelson out of trouble.”