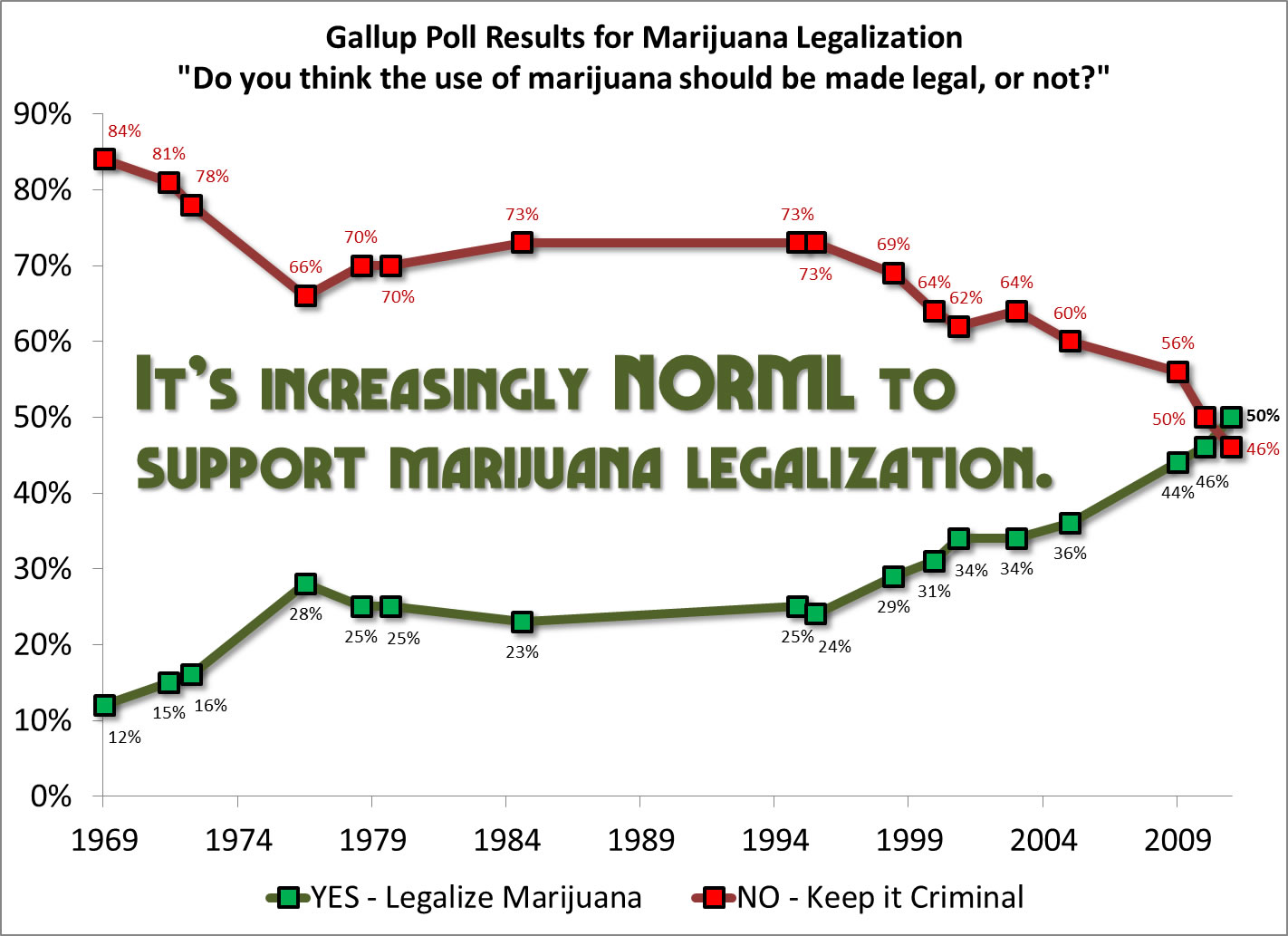 Can You Smell It?

This year could likely be the most significant in marijuana law reform history. In case you hadn’t heard, three states, Colorado, Oregon, and Washington, will be voting on some form of marijuana legalization on November 6th, and two states, Arkansas and Massachusetts, will be voting on medical marijuana.

Perhaps even more significant than all of these proposals, are the recent nationwide polling numbers regarding marijuana legalization. In October, 2011, for the first time ever, Gallup reported a plurality of Americans, 50%, were in favor of legalizing marijuana, with 46% opposed. Then, in March, 2012, Rasmussen also reported a plurality of Americans in favor of “legalizing and taxing” marijuana (47% favored, 42% opposed) in order to “help the nations financial problems.” However, the biggest news came just a few months later when Rasmussen, again, asked the question, but with a slightly different slant. In May, Rasmussen asked Americans if they were favored legalizing and regulating marijuana “in a manner similar to alcohol and tobacco,” and the answer was overwhelmingly yes, with 56% in favor and just 36% opposed. Considering the polling trend over the past decade, this most recent poll seems to suggest that we are nearing a point where Americans support marijuana legalization at a two to one margin. This is huge news, but it doesn’t necessarily mean an easy or quick victory.

The last time any state voted on marijuana legalization was in 2010, when California’s Prop. 19 was voted down in what many people viewed as an upset. That defeat, despite widespread support of marijuana legalization in California, demonstrated the complicated nature of voter ballot initiatives, and also highlighted fault lines in the activist community. Marijuana law reform activists and supporters are not a monolithic group. More than fifteen years of legal medical marijuana in California, brought about by the passage of Prop. 215 in 1996, have changed the activist landscape there and, more broadly, the west coast. Subgroups and alternate factions of activists, with different goals and agendas, have popped up not just in California, but in many states which have seen years of legal medical marijuana access.

Differences between activist groups were highlighted prior to California’s vote on Prop. 19. Some medical marijuana activists feared it would harm their access, and some legalization activists feared it didn’t go far enough, or still included too many restrictions. The problem with that logic is medical marijuana has been increasingly under attack, and even in California, according to the California Criminal Justice Statistics Center, misdemeanor arrests for marijuana have sharply increased over the past 20 years to record levels of nearly 55,000 per year, comprising 22% of all drug arrests. Marijuana possession arrests in California have increased more than 100% since 1990. Nationwide in that same time, marijuana arrests have increased more than 250%, going from 326,850 to more than 850,000, and nearly 90% of those arrests are for possession. What conclusion should activists take from this?

Despite the success of medical marijuana laws, there is much more work to be done in order to end the massive number of marijuana arrests nationwide. And if history is any indicator of how to accomplish that, states like California will have to take the lead as they did with medical marijuana. Since California legalized medical marijuana in 1996, 16 other states, and Washington D.C., have followed suit. Even with more than one third of our country having passed some form of medical marijuana, our Federal government has not yet moved on the issue.

Enactment of marijuana prohibition didn’t happen overnight; neither will its end.

Consider that the first state to pass a law against marijuana was Massachusetts in 1911, 26 years before Congress passed the Marijuana Tax Act. During the 26 years between Massachusetts’ law and the Tax Act, nearly 20 other states passed anti-marijuana laws. Solidification of marijuana prohibition came more than thirty years after the Tax Act, when it was listed as a Schedule I Controlled Substance under 1970’s Controlled Substances Act, after which marijuana arrests began to balloon. The lesson here is that changing established public policy is not something that can be accomplished uniformly, quickly, or easily. But, nationwide policy is more likely to change as more states join in, and this November could very well bring about the first state to vote for legal marijuana. If so, it will likely be the first in a long line of states to do so before the Federal government.

For that reason it is imperative for marijuana law reform activists in Colorado, Oregon, and Washington, to put everything into passing their respective legalization initiatives.
The sooner we can get the first “domino” to fall, the quicker more broad changes will happen. Activists fighting against activists are delaying progress, and they should keep in mind that public opinion plays a vital role in voter initiatives. If 56% support legalizing and regulating marijuana “in a manner similar to alcohol and tobacco,” it’s highly likely the number will significantly drop without sensible regulations. Even many in the legalization community agree with some sensible regulations, especially if that expedites an end to hundreds of thousands of marijuana arrests every year.

Ending those arrests is the goal of organizations like NORML, and that is why we support any and all steps in that direction. Whether it’s a decriminalization bill, an affirmative defense medical bill, (both of which NORML has supported in Texas for years) or if it’s a legalization bill (with regulations) in Colorado, Oregon, or Washington, NORML supports any and all chances at protecting responsible, adult marijuana consumers from arrest and imprisonment.

For more information on marijuana law reform around the country, visit:
http://norml.org/about/smoke-the-vote