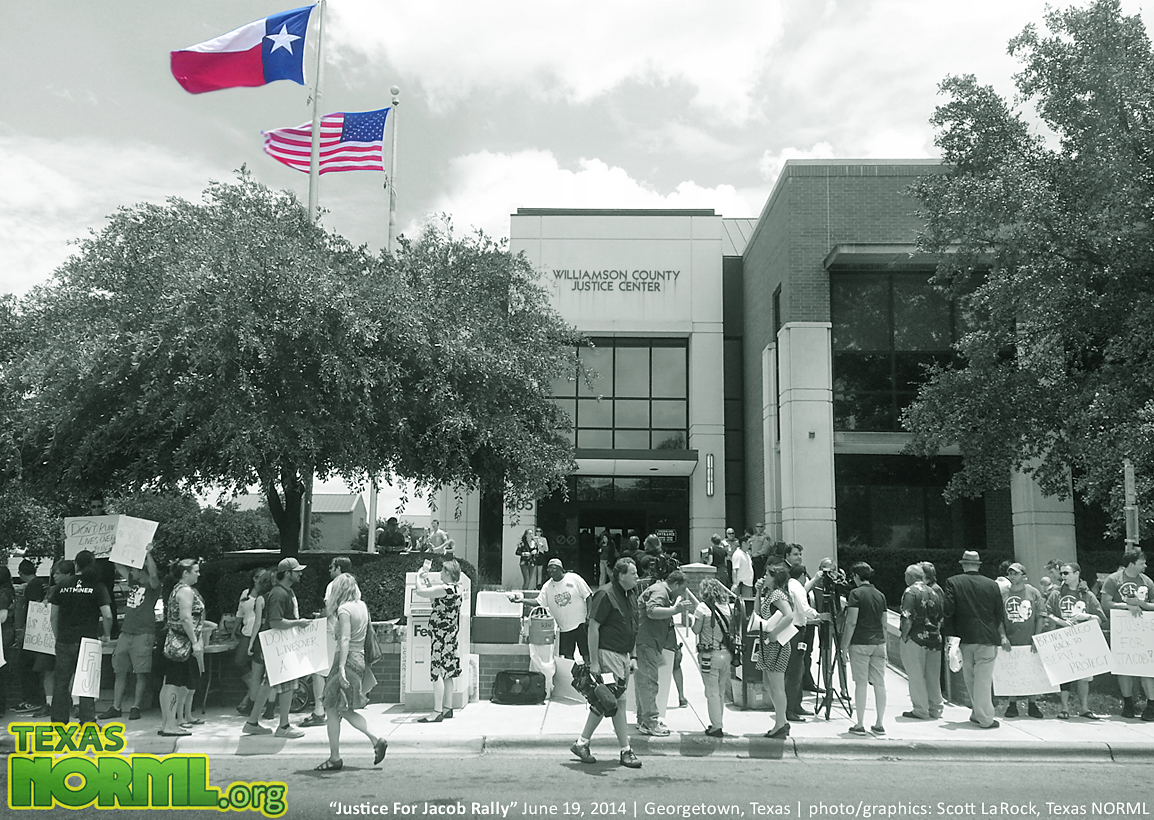 My name is Jax Finkel, a resident of Williamson County, one of the Administrators for the Justice for Jacob Facebook page, a local activists and the Deputy Director of Texas NORML.

When I first heard of Jacob’s story, I had never met him. I did not know his life story. But here is the story I did know ~
Texas made over 72,000 arrests in 2012 for marijuana-related offenses. An incredible 98% of those arrests were for possession of marijuana. During the same year, 90% of all reported burglaries — which include home invasions — and 88% of all motor vehicle thefts went unsolved by law enforcement. In Texas, minors and adults under 21 make up more than 40% of all marijuana arrests. Every 10 minutes a young Texan is arrested for marijuana, costing over $655 million per year. These youths are then saddled with criminal records, loss of scholarships and job opportunities, and many face jail time. Texans demand education and adjustment of civil penalties in place of costly and damaging incarceration! Do not criminalize our youth, prioritize violent crime!

So you see, before I even met Jacob, I realized there is an epidemic of criminalizing our youth in Texas.

Each of those marijuana arrest costs taxpayers an estimated $10,000. While in the 2011-12 school year, Texas spent $8,498 per student in public schools grade k-12 and were ranked at #44 in the nation. We want Texas and Williamson County to prioritize schools not jails!

So you see, before I even met Jacob, I realized there is a mis-prioritization of funds in our state.

That gentleman’s sign says that the rapist of his child only got PROBATION. Well, Jacob has already sat in a cell with real criminals for 26 days. Does the punishment fit the crime to you?! People across the country and the world have noted Texas’ draconian drug laws and cannot believe there is a place where someone could face LIFE in JAIL for the possession of a plant.

I may not have known Jacob’s individual story but I knew that we have 80 years of victims of the failed Drug War. And as I watched Jacob’s story on the news and heard him talk about how scared he was and how he is anxious about his future, I thought, “Enough is Enough!” Jacob is not the first (and there ARE people serving life in jail for possession of a plant) but hopefully, together, we can help make him one of the last!

So how can you help change the laws in Texas?

In 1997, Texas lawmakers worried that drugs were becoming cheaper and more accessible because dealers were cutting cocaine, heroin and other drugs with other ingredients. They wanted to make sure the penalties for selling such drugs weren’t diluted just because the batch was. So they approved a bill that year that broadened the definition of a drug to include ‘the aggregate weight of any mixture’ that contains the drug. Officers could use the full weight of the mixture to determine the severity of the drug charge. But legislators never intended for that definition to include the flour, eggs and chocolate in a batch of pot brownies, say the bill’s authors, state Sen. Leticia Van de Putte and former state Rep. Miguel Wise. “It was never my intent for a nonviolent individual to go to prison for life in a situation like this,” said Van de Putte, “This seems to be more reflective of the prosecutorial point of view of Williamson County.”

Due to law changes in 1997, Texas must change drug laws at the state level. In Texas, we cannot collect signatures to get a ballot initiative on the ballot at the State Level. Therefore we are reliant on our elected state officials, Texas Representatives and Senators. This means that who you VOTE for really matters. Register to vote! It is Texas’ only hope! Our Legislators meet every 2 years for 140 days if there are no special sessions. Please stay tuned to the 2014 Texas NORML Voter’s Guide (due out Summer of 2014) so that you can know where candidates stand on the cannabis issue and consider it when you vote. Then our next chance to change the laws will be the 2015 Legislative Session.

In the 2013 session, HB 184 (a decriminalization bill that would lower the penalty for possession of under an ounce that passed out of committee with an amendment that it would apply to first time offenders under 21 years of age) passed out of Criminal Jurisprudence Committee with a bipartisan vote of 6-3. I think when there are Representative on the Committee that are eloquently making arguments for decriminalization during the hearing that it is safe to say change is coming!

We have a poll from Texas Public Policy that shows that 79% of Texans support drug law reform. Another poll from Public Policy shows that 61% of Texans support decriminalization and 58% changing Texas law to regulate and tax marijuana similarly to alcohol, where stores would be licensed to sell marijuana to adults 21 and older. And now, 77 percent of registered Texas voters believe in some form of legal marijuana, according to UT and the Texas Tribune. Shockingly, according to a poll by TMPA (the Voice of Texas Law Enforcement), 64% of Texas Law Enforcement want to see cannabis laws change. With 36% of those officers supporting it being legalized, taxed and regulated.

So when people ask you, “Why are you worried about a kid getting caught with marijuana? Why don’t you worry about the murders?” Please let them know that by shining the spot light on the mis-prioritization of crimes and the expenses we incur in prosecuting non-violent offender, we are helping educate people so that they too can see that our Law Enforcement’s time is WASTED by this failed Drug War. We want to see them stop spending their time on non-violent drug offenders and focus on true crime – burglary, rape, assault and murder. We want Texas and Williamson County to prioritize VOILENT CRIME!

We want to build a relationship with our Law Enforcement, Lawmakers and our Judicial System so that we can let them know what the residents of their county (and State) think about how they are prioritizing crimes and funding in Williamson County. As the fastest growing county in the nation, we have to be financially prudent with our funds and our officer’s time. Let us bring WilCo’s reputation back to serve and PROTECT! Let us open a respectful and responsible dialog on how we can address these issues on our County and State.

It is time to RETHINK drug policy in Texas!

Now that I have had the opportunity to get to know Jacob and his family, it even clearer that they are more than statistics on a page, they are PEOPLE. They and other victims of the failed drug war need our help. Will you answer their pleas?