Republican Delegates at the State Convention in San Antonio succeeded in updating the Texas GOP platform to include planks that support making the Texas Compassionate Use Program (TCUP) more inclusive, removal of criminal penalty for possession of 1 ounce or less of marijuana, the re-scheduling of and growing industrial hemp in Texas. This took a powerful effort from the grassroots, delegates and Republicans in advance of the convention and during the long, multi-step process it takes to approve and adopt planks to the Republican Platform.

Keep these victories coming by making a contribution today!

Here is what happened over the week leading up to these planks adoption:

These types of changes are extremely important in advance of the 2019 Legislative Session. Pre-filing bills will start on November 12th, 2018 and the session will officially kick off on January 8th, 2019.

You can help us by becoming a member, a sustaining or onetime donor!

If you are in the Fort Worth area or are a delegate to the Democratic Convention, join the Texas Cannabis Caucus on Friday, June 22nd, 2018 at 1pm. 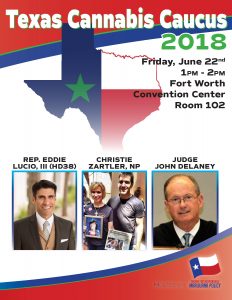 Stay tuned for our updated General Election Voter Guide this fall. Prepare for the legislative session by brushing up on the keys to activism.