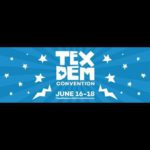 The road to San Antonio, TX was an experience that I will never forget. The three weeks leading up to the convention had me in great anticipation as to what was to come. Would we have 50 people attending or 500? That was a question that would soon be answered. Never before had I imagined the response we would receive at the first Cannabis Caucus for the Texas Democratic Party being so strong. And never would I have imagined I would have the honor of moderating for these amazing individuals from all walks of life. Attending were approximately 500 enthusiastic delegates that were Cannabis supporters from around the state. All were ready to hear our panel. They included: Dr. Elias Jackson, President and Virypharm Biopharmaceuticals, Heather Fazio, Political Director for MPP, Coleman and Sheila Hemphill from the Texas Hemp Industry Association and various candidates from around the state running on as a cannabis advocate.

It was a hot June 17th day, with temperatures well at 100 degrees. The convention organizers told me that we would not have access to a screen or projector. I did not realize that also included no microphone. As we arrived for the Cannabis Caucus, I ran into Shirley Falzone, a former teacher of mine who is also now serving as the Smith County Democratic County Chair. As we noticed this was going to be a lot more than just a few people, the excitement and buzz in the room was electric. Ms. Falzone told me, “Remember in school you were trained to project your voice? Yes, Ma’am I nervously answered. You got this!” She gave me that infamous look and off I went to begin what was to be an experience I will carry for the rest of my life.

As I began my introduction and looked at our attendees, a sense of pride overwhelmed me. I know deep in my heart that my late father was with me. Remembering those last days of his life as he suffered miserably of terminal cancer. I had begged him to allow me to take him to Colorado for a medical card and relief from an MD failing to prescribe him the proper nausea medication. Never should a son be told by his dying father that because of a potential drug test, the threat of losing Hospice Care was a possibility. Thinking all of these things took me into a totally different direction that I had prepared. Obviously with the number of attendees and the need to project our voices changed the delivery of the message for the better. This was about change. This was not about Democrat versus Republican or Bernie versus Hillary. It was about a united voice.

Our panelists delivered phenomenally. The knowledge and research information of Dr. Elias Jackson was applauded. The fierce determination and deep understanding by MPP Political Director Heather Fazio was unmatched! The unified delivery by Coleman and Sheila Hemphill of Texas Hemp Industry Association served as a testament that Texas is ready for change in our thoughts and beliefs on Cannabis. The time is now to insure our legislators hear our efforts and this was the perfect avenue to insure that our future legislation includes that exact message: “Cannabis Now!”

Additionally, the message from various individuals running for office added to the excitement and true understanding that the Cannabis Caucus for the State of Texas is here. Ready to insure that the health and well being of our loved ones will include a plant extract. No longer seen as a seed from the devil but as a Plant from God. Most importantly is to convey the message from this caucus that Medical Cannabis must be included in our message to the convention. Before we knew it, our hour was over and individuals were very thankful for the organization of this caucus and encouraged me to continue working for cannabis policy reform, which is exactly what I did.

Exactly 15 minutes after the caucus, the East Texas Caucus was set to begin. Still riding a wave of adrenaline from the Cannabis Caucus, I was in the position to continue my efforts to influence future legislation from Senate District 1 but running for the Platform Committee. I was appointed unanimously, and I am greatly appreciative to the East Texas Caucus for their support. Now, I was expected to represent East Texas on a wide range of topics.

The Platform Committee was chaired by Celia Israel from Austin. It was an honor to meet her, and I found her leadership of the platform committee to be strong and patient. The committee’s session went well throughout the day. I was proud to serve on this committee as I met some great individuals from throughout the state. Various ideas and beliefs were presented. This is what the Democratic Party is about: inclusion–not isolationism or segregation of beliefs. The wide range of topics resulted in an expanded platform. Strong…with a determined focus on change for our proud state and country.

You can read the full Democratic Platform HERE.

At the end of the two days I was able to influence changes for cannabis policy reform and include Hemp in the Agriculture section of the platform. It is an honor representing all Texans. As other issues were discussed during the committee’s discussion, which included ethics, immigration and LBGTQ rights just to name a few. My efforts are for all of those suffering from an illness that a plant extract can relieve the stress, pain and suffering in their lives. Our work isn’t over, it’s just beginning. But we are off to one hell of a start!

Cannabis Policy Reform
Our current cannabis laws give power, control, and illicit funding to violent drug cartels. These laws disproportionately affect communities of color, even though cannabis use among different ethnicities is equal, and destroy lives with a criminal record. Cannabis policy reform can improve public safety, boost our economy, and provide much-needed health care options for struggling Texans.
As Texas Democrats, we:
● urge the President, the Attorney General, Congress as well as the Texas Legislature, to support the passage of legislation to decriminalize the possession of cannabis and regulate its use, cultivation, production, and sale as is done with tobacco and alcohol;
● urge the review of all cannabis-related incarcerations, ensure a safe release of any nonviolent Texans jailed for small possession of cannabis, and expunge criminal records for any Texan charged or jailed for those laws;
● support comprehensive study and diligent research, particularly from states who legalized cannabis on health effects of cannabis usage on people;
● urge the Texas Legislature to study the laws and systems in Colorado, Oregon, and Washington as a first step in implementing a similar system in Texas;
● urge the Texas Legislature to improve the 2015 Compassionate Use Act to allow doctors to determine the appropriate use of cannabis to certified patients; and
● urge the immediate decriminalization of possession and use of cannabis for medicinal purposes.
Share:
prev post next post